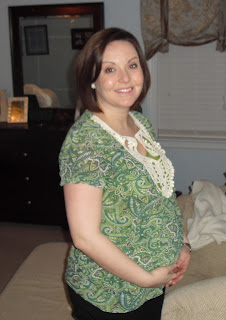 Size of baby: size of a sack of potatoes

This week: I feel huge!  :-)  I was told this week that I'm beginning to waddle.  Not sure that I took that as a compliment!

It's been a baby full week.  We had breastfeeding class Tuesday night, met a pediatrician on Wednesday evening, and yesterday morning I had another doctor's appt. As for our classes, we only have one more class on infant CPR this coming Monday and then we will have finished our 6 weeks worth of classes. I'm glad we took them but they are a little exhausting week after week. We will also have a tour of the hospital which we will take in April.

I had an ultrasound scheduled to get a check on my amniotic fluid situation so Matt decided to join me. Everything still looking good. The ultrasound showed that my fluid is looking good so my doctor is not worried.  Yay!  The ultrasound lady told us he's still a boy!  :-)  His HR was 124 on the ultrasound which was a little concerning but he was sleeping/resting.  He would kick back if the ultrasound lady aggravated him enough but he just wanted to be left alone to sleep.  That's my baby!  :-)  Anyways, he was good and awake by the time I saw the doctor and his heart rate was back up to 149.  The baby is head down. His little arms were up at his face resting and his feet were up near my right side.  He wiggled his toes for us. He is measuring a little bit further along so the ultrasound showed my due date as 5/1 but my due date has been 5/12 all along.  My doctor said that she wasn't going to change it but he may come early.  The ultrasound showed him measuring at 4 pounds 7 ounces and the size of his head is in the 90th percentile.  I asked my doctor if she thought he was going to be a big baby and she said no.  However, the ultrasound tech said I could have a 10 pound baby!  I choose to believe my doctor on this one.  My doctor asked Matt how tall he was (6'2") and told me it was is his fault!  My blood pressure was great (124/76), despite the fact that the ultrasound tech had just said something about me having a 10 pound baby.  :-)   My doctor said not to expect him to move a lot since space is getting limited.  I will go back in 2 weeks for another appointment and will go back in 4 weeks for an appointment and ultrasound.  After that, I go ever week until I have him.

We have a fun, busy weekend planned.  I'm so excited.  My mom and sister arrived last night and are going shopping today while Matt and I work.  My sister and Matt's sister are throwing a shower for family and friends.  Hopefully, I'll have pictures to share and I'll try to do better about getting them posted in a more timely fashion.
Posted by Stephanie at 7:18 AM