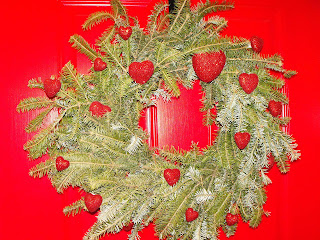 This is the wreath that I bought for Christmas, which is dead and needs to be thrown out but is still holding up.  I just added some red hearts that I got for very cheap at Hobby Lobby and figured I could use them to add a little Valentines decorations.

It's been a rough day for the Wheawills.  I had a really bad night.  I was awake from 1am until about 4:15.  Theres not much to do at that hour as I watched tv on the couch.  I still didn't sleep good and woke up about 5:15 and got up from the couch to move back upstairs and slept until 6.  Then on my way to work, I spilled my water all over me and my car.  Wonderful!!  I don't know why I'm not sleeping.  I think it may be a combination of things:  pregnancy symptoms and then it feels like I've recently had a lot on my mind right before bed and had trouble turning off my brain.
As it turns out, Matt's "little cold" that I referred to in my last blog is really doing a number on my sweet husband.  He was feeling much worse today so had to leave work early.  :-(  I told him to take some cough syrup and a claritin.  I became more concerned when told me that he was having chills and then hot the next minute but didn't think he was running a fever.  I told him it sure did sound like he was.  Sure enough, he definitely had a fever when I got home.  He was burning up.  He sounds pretty bad with a cough and congestion.  I don't think it's the flu but we'll see.  So, being the pharmacist, I gave him some tylenol and told him to take more of the cough syrup.

We are both calling it a day and going to bed early.  Since I really don't want to take any chances and have already been sick once this year, I'm in the guest room tonight and he will sleep in the bedroom.  It's been a rough Valentine's Day, but we hope that tomorrow will be much better!

On the up side:  I did run by the hospital tonight and got to see my friend Christie and her sweet little baby girl, Madeline.  Madeline has a head full of hair and is a very cute baby.  They both seem to be doing really well!  :-)
Posted by Stephanie at 9:19 PM