Charlie had school pictures in April.  The pictures were horrible and if they weren't so expensive, I would have bought one just for laughs.  He could not have looked any more miserable!  I guess that he wasn't feeling the mood to sit still and be photographed.

Anyways, they did a class picture and even though, there is a hand right at Charlie's face, I found it to be a cute picture of the class and the teachers.  He talks pretty regularly about his friends at school and he loves his teachers.  He isn't in this same class anymore but he will still come home and talk about them.  He just told me last night that his best friend was a kid that is still in the class. 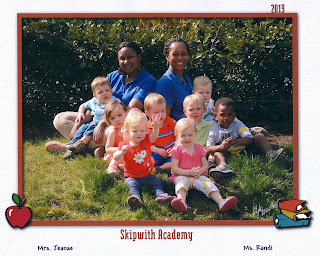