The days seem to have flown by and I have indeed lost touch with the real world.  I don't think I realized how much my world would be flipped upside down once we got home.  Luckily, we have had a lot of help because I don't know for the life of me how people do it without.  I've had to call on several favors.  My mom has helped with the cooking and laundry on top of taking a few nighttime hours to help with Charlie and give Matt and I some relief.  Of course, I'm feeding every 3 hours (and it takes an hour to feed which really means only 2 hours in between).  Sleep has been limited of non-existent.  :-)  Matt has been on full time duty with me and it's just been so nice to have such a hands-on partner that has taken his on his share of the responsibilities with doing diaper changes, burping, grabbing whatever he can for me, etc.  Sometimes he just comes in and talks to me while I'm feeding which is wonderful to have at 4:30 in the morning.  Unfortunately, for both us, he has to go back to work tomorrow.  Charlie and I are going to miss him a lot and this is what we think about Daddy leaving us. 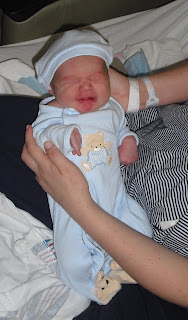 We introduced Wally to Charlie on Thursday after getting home. 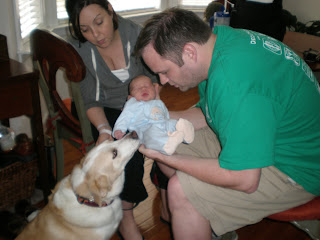 Matt and I have been trying to prepare Wally for the changes that were going to occur but knew that there was no way to actually prepare him for the road ahead until Charlie got here.  Wally was definitely very excited to check him out but I think he was more excited at first to see me after I had been gone for the last several days at the hospital.  It was nice to see that he missed me! 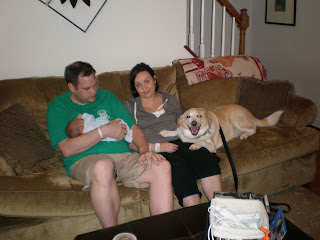 At first, when Charlie would cry, Wally would bark.  However, that was short lived (thankfully).  Now, Wally has settled right in and I think he's going to make a great big brother. 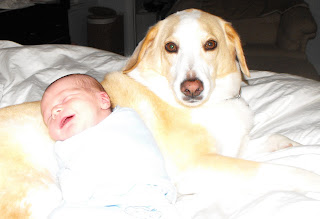 Well, it's my downtime and I have 1.5 hours until it's time to go again so I'm going to catch some zzzz's but I promise to post more pictures very soon but here's a sweet picture to end this post on. 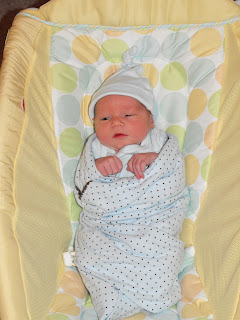 Posted by Stephanie at 9:00 PM