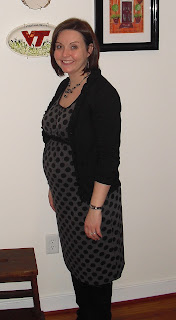 Size of baby: size of a papaya (It has been the same for the last several weeks, so I found something else that said that he is the length of an ear of corn.)


This week:  I feel like this week is monumental because I'm 6 months and in the 3rd trimester.

Matt would say this week is monumental because he got a new car.  It's a family car so Baby W was definitely involved in the decision, little did he know.  I sure hope he likes his new ride becuase Matt and I do.  I need to take a picture of Matt with his new car.  It's a 2009 Hyundai Genesis sedan.

I have been doing very well and really don't have any complaints.  I have really felt great and feel very lucky to have such a great pregnancy so far.  I hope this continues as Baby W continues to grow.  I feel him moving around a lot; some days he's more active than others. I'm pretty exhausted in the evenings, but tend to do everything that I did before at work (other than lifting the heavy boxes which I haven't done for a while now).  My leg cramps seem to be a little better this week.  I tend to sleep pretty well overall.  I've never had too much difficulty sleeping.  Sometimes my back hurts, making it hard to sleep but then other nights, I'm out. (Matt says I've started snoring a little.)  I did have a crazy dream last night when I dreamt that Baby W was here and I forgot to feed him.

We picked up the crib this week and Matt put it together this weekend.  I will post pictures of the nursey in a separate post.  I like to go in there and sit in the chair and look at his room.  :-)
Posted by Stephanie at 8:52 PM