We decided that when we got the new furniture, it would be a good time for Wally to transition from my side of the bed to Matt's side.  I love having him on my side of the bed.  It's the way it's always been.  He gets in his bed at night and then if I wake up, I can see him.  But, since the baby will need to be on my side of the bed, we decided that we would move him over to Matt's side.   (We are a little worried about Wally's jealousy issues and his only child syndrome which we are working on and needs much more work than just moving his bed...more to come on that!)


This week has been a little different but Wally has handled this transition beautifully.  It gives me hope that he will learn his role quickly and stop being so bad around babies!  Last Saturday night should have been the night of him moving but I was too tired and really just wanted to go to bed to fool with worrying about moving him.  :-) That's my excuse.  Sunday night was his first night.  So, we moved the bed to the other side. 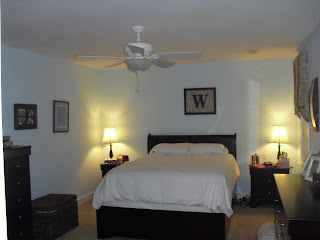 Wally has cuddle time with us before bed and then we tell him to get in his bed.  So, he went over to my side of the bed and laid down. 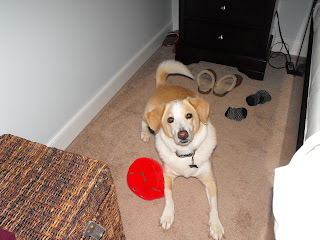 Matt had to get up and bring him over to the other side and put him in his bed.  Once he got in his bed, he was fine. 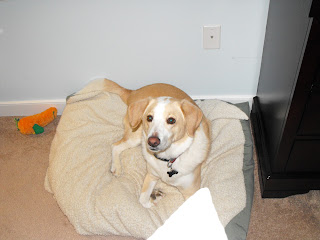 He was just slightly confused!  ;-)

It only took Sunday and Monday night of him going to my side of the bed and having to be shown where his bed was.  After a few nights, he and I are both used to him being on the other side of the bed.   Since, I'm seriously posting a blog on this topic, I can only imagine how hard it's going to be on me to transition the baby from being in our room to the nursery.
Posted by Stephanie at 8:08 PM