Charlie started wearing pull ups a few weeks ago.  Since May, he has been having dry diapers in the morning.  It was concerning to me when it first started happening.  He also will wake up from nap dry.  It's about 50/50.  Daycare wanted to try to introduce him to the idea.  Many of his friends about his age are already trained but he hasn't really wanted to sit still long enough at home to get on the potty so I hadn't really pushed it.  Anyways, the first couple of weeks, he wasn't consistently sitting on the potty and he would NOT sit on the potty at home.  I was ready to give up for a few months until I came home and saw this: 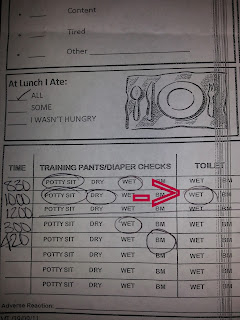 So, it's a small step.  We'll keep moving forward and hopefully get serious after vacation.

As for random other things, Charlie is so funny these days.  He tells me things like Matthew Brown (a kid in his room at school) is a troublemaker.  He also likes to tell me that he eats tuna salad for every meal.  He loves to give me a kiss attack.  Anytime he hurts himself, he will tell the inanimate object, "Not nice".  I think Daddo is going to change over to Daddy as he goes back and forth.  He is really good at brushing his teeth, but no so good at spitting out the toothpaste.  I'm sure he will learn to spit and then he'll spit all the time.  Yuck!  He's a great sleeper now.  He tells us sometimes when it is time to go to bed.  :-)  He can stall bedtime but doesn't typically.  I'm sure that is coming.  He loves to eat.  I couldn't even begin to pick his favorite foods as he has quite a few but I would be safe with saying M&Ms.  The boy loves to snack but he will eat his vegetables and meats pretty good too.  As for TV, he used to only watch Sesame Street.  Normally, he gets to watch one show as soon as he gets home.  It gives us time to get dinner ready and his a few minutes to rest and drink some juice.  However, on the weekend, he normally watches TV when he first gets up and is waking up.  Right now, his favorite show is Mickey Mouse Clubhouse.  He also loves Chuggington and Curious George when he isn't watching Mickey Mouse or Sesame Street.  He's all boy as far as what he wants to play with:  balls, cars, trucks, lawn mower, golf clubs, baseball bat, etc.  He loves Spiderman.  Not sure where he was introduced to Spiderman but he picked out for his napper at school to be Spiderman and also got some new tennis shoes that are crazy wild Spiderman and light up.

He loves to name shapes and colors.  He's really good at it as you can see from the video.

He also is loving playing with flash cards.  They have them at school and do them a lot and I found some in the dollar section at Target.  They are now in my purse as an activity for when we go out to eat.  :-)

I am loving this stage of development.

Tonight, I asked him if he knew what was going to happen tomorrow.  He said "Yes" so I said "What".  He said "It's going to rain".  Haha!

Posted by Stephanie at 8:19 PM