Where does time go?  I'm not quite sure but I can't believe we are getting close to having a 2 year old.  Well, I think I did say recently that I wanted to freeze time because Charlie has been so fun lately.  This week, not so much!  :-)  He was a bear most of the time and only wanted his "Daddo" which didn't work for Matt or I very well.  It was a hard week and I'm hoping that most of his tantrums and issues were surrounded around him feeling bad and not his age.  This is actually some pictures on the day of his 20 month birthday.  I think the pictures definitely show how bad he was feeling.  Luckily, he got much love from his Grandpa and Grammie. 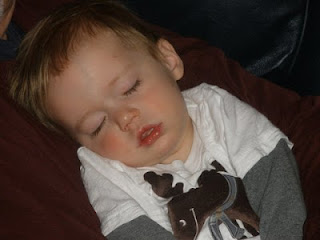 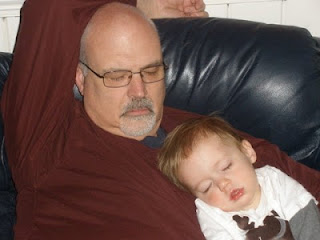 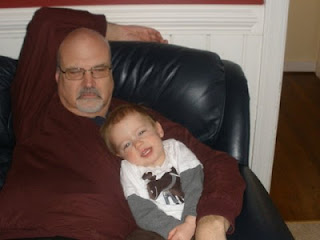 I think he looks so much older these days. 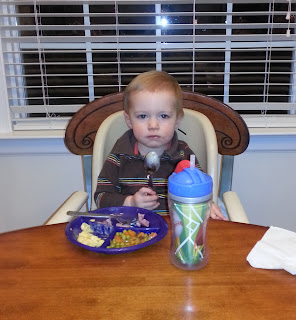 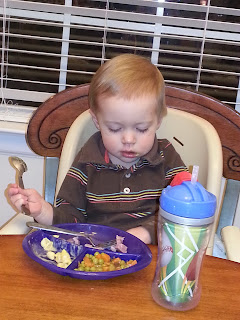 My favorite thing that Charlie has done in the last week or so is that he  has started giving real kisses.  I probably have asked for more than my share but I can't get enough of the sweet kisses.

He is obsessed with his coat and hat and he will make sure to tell you to put them on before we leave to go out.  Should "Daddo" as he calls Matt wear a baseball cap, he must also. 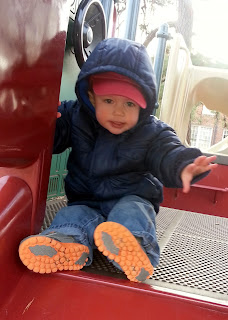 He is learning all kinds of things.  I think he is saying his colors but really only consistently says "blue" or "red".  He talks all the time these days and repeats everything we say.  He's interested in the phone and has even talked a little on it.  He thinks it's hilarious to hold the phone up to Wally's ear so he can talk on it.
If he's not climbing, then he's running.  We still don't have many sit still moments.  Although, when Matt picked him up from daycare he was sitting in his seat at the table hanging out and Matt asked them how they got him to do that for longer than 2 seconds!  :-)