Fall is my favorite time of year. Fall means: VT football (not going to discuss this past weeks game because no one wants to read my ranting), wonderful weather (I love to wear long sleeves and jeans and no coat), absolutely breathtaking scenery with the fall leaves in the mountains (probably the best time to drive to Grundy), eating chili (yum!), fall decorations (love decorating), Thanksgiving (Turkey and all the fixin's...yum), even the smell outside during the fall.

Here are some of my Fall decorations: 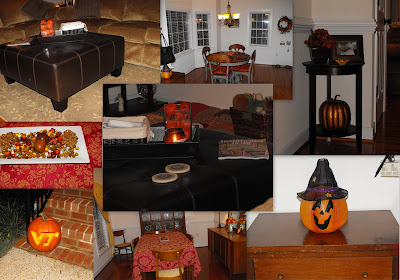 I must admit that Halloween is not my favorite holiday...although I like to decorate for it. I do not love the dressing up part. Last year, I went as a pirate and Matt went as Charlie Brown from "It's the Great Pumpkin, Charlie Brown". I remember last year I didn't have a costume until late and thanks to a friend, I borrowed the pirate costume which was very itchy. I'm a girl who's style has to include "comfortable" so wearing an itchy costume or painting my face is not exciting at all. Not to mention, I love to shop and spend money on clothes but spending money on a Halloween costume is really hard for me. I would rather buy myself a sweater. (I'm such a party pooper, I know!) So, this year, yet again Matt and I had no plans of what we were going to be. Friday, I was wearing some candy corn earrings for Halloween at work and that got me to thinking, I could make my costume and go as candy corn. (Yes, make it! I would go buy fabric and get to it! My deal to myself was that it had to be less than $15. I only spent $9.50 total and it took up about 2 hours of my time...not that bad! Don't look too close. There are a lot of mistakes. I used the no sew stuff that you iron.) 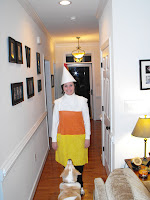 Matt didn't have a clue what he was going to be but his sister had given him an idea that a friend did back in college....wear a trash bag and put some yellow balloons on them and be poop with corn in it. So, Matt tells me that's what he was going to be and despite me talking him out of it, it was the easiest costume and he thought it was funny. So, I guess you could say our theme was corn. Too bad I don't have a picture of Matt but I'm sure you get the picture. :-)

So, we went to a Halloween party and I have to say that all of the costumes were really cute (much better than ours). But, yet again, I didn't get my camera out. I'm trying to be better at this.

We didn't dress Wally up but as you can see, he was very interested in what we were doing. He doesn't fit into dog costumes. I joked that I was going to make him be a pig because his tail curls in the back and he truly is a pig with all food. He has become quite the beggar.

Posted by Stephanie at 5:49 PM