An advantage of working for the government is the holiday time and January is a good month for that!  With that being said, I'm enjoying my extra days with my family and our good friends.

Backing up to the January 1, Charlie had his first mustache. 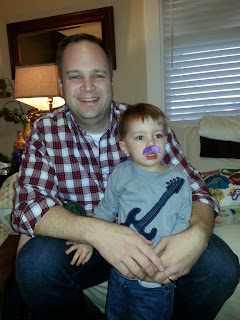 We had a good visit with the McGreevy's.   This is the only picture I took of Charlie and Hailee while they were enjoying their dessert.

We also got to hang out with the Hamrick's. 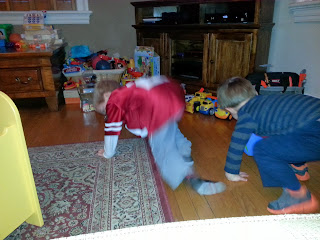 It was really cute to see Charlie and Wyatt throwing a football back and forth to one another.

Charlie has been a great helper these days; he's really into helping in the kitchen unloading the dishwasher, 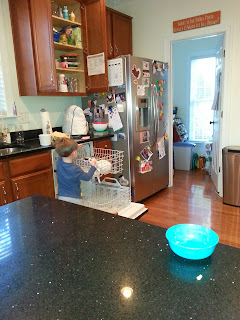 filling Wally's food bowl, and cooking with one of us.  We made individual pizzas.  He took a lot of pride in making his own pizza.  We told him we were having a pizza party, which then reminded Matt of a commercial for a game called Pizza Party back in the 80's.  Matt looked it up on You Tube.  Charlie loved it and really jammed out to it.

Charlie is obsessed with watching Mickey Mouse Clubhouse these days.  It's turned into a little bit of a struggle.  Every morning he wakes up and first thing he says to me is that he wants to watch Mickey Mouse Clubhouse.  This morning, he waited a whole 2 minutes before he asked.  He likes to get in our bed and watch it though and I do like being able to lay with my sweet boy in the bed and snuggle before having to get up.

We had a nice weekend.  I actually left from work to go see my friend Diane who lives in Durham, NC.  Diane was my roomie during pharmacy school.  It was a very quick trip but we made the most of it and stayed up until 1 am.  I told Matt and he was shocked that I made it up that late.  Those who know me, know I like to go to bed early.  I also slept until 9 am.  I am pretty sure it's been exactly 2 years and 8 months since I slept that late.  :-)  Diane took me out and showed me a little bit of Durham but the weather was not really cooperating with us doing too much which was fine with us.  We didn't stop talking the whole time we were around each other. We went to Parker and Otis and then had to stay a little longer than we planned due to a tornado warning.  It was pretty crazy for about 5 minutes. Luckily, I'm not sure that there was any tornado that touched down.  Anyways, I really liked that store and the food was delicious.  They had some fun things for me to get for Charlie.  I brought him a new place-mat home.  I started using them with him at the table when he turned 1 and he's a little obsessed.  I also brought him a wind up dinosaur which was a big hit. I also got a few other gifts that I'm going to give sometime later when I need a little something.  I left to go home that day and I was fortunate to not have any weather issues on my drive.  I didn't take a single picture of my trip but it was a lot of fun.

Matt and Charlie had some time at home.  Matt is such a good Dad.  He took Charlie to get a doughnut and to the Children's Museum so Charlie definitely had a good time.  It's hard not to feel a little guilty when I leave home but I know they are both fine.  Matt is so sweet though; he told me he was glad to keep Charlie and was glad I got to go.

Charlie is obsessed with trains and we had a train filled day.  I'll let the pictures speak for themselves. 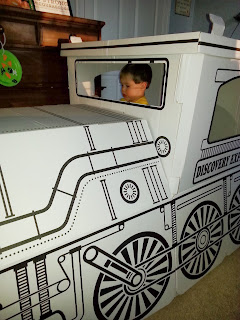 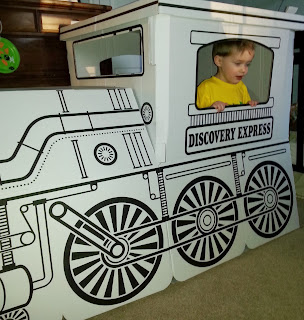 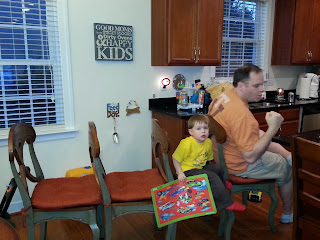 We did manage to get outside and got to go to the park. 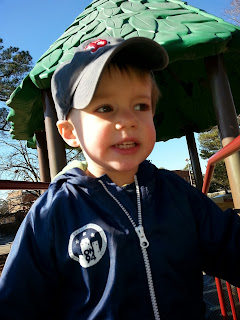 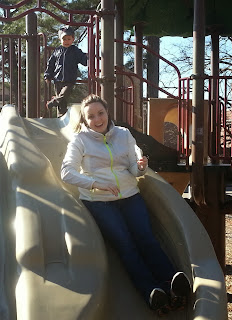 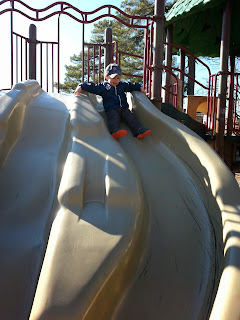 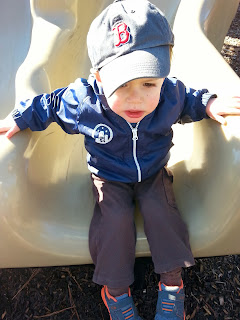 Charlie told us today a couple of times that he didn't feel good.  When asked what hurt.  He told me his body hurt.  I then asked him about his different body parts.  I was able to rule out that his fingers, hands, and arms did not hurt.  However, his tummy, ears, legs and feet did hurt.  I'm not sure what that was all about.  He also complained of being hot so he took his shirt off to cool down. 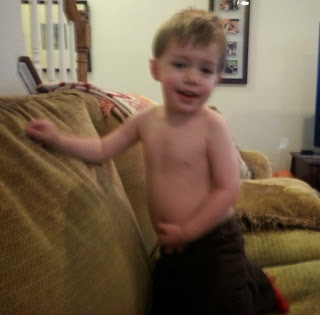 I recorded a video tonight and it's evidence that poor Wally is the most patient dog and so sweet to Charlie who aggravates him all.the.time.  I'm sorry about the quality of the video.

Posted by Stephanie at 8:52 PM