It's my favorite time of year and this year is even better, with a boy who is discovering Christmas and taking every little bit in!

Before I start in on the weekend, we went out to our favorite tacky light this past week. 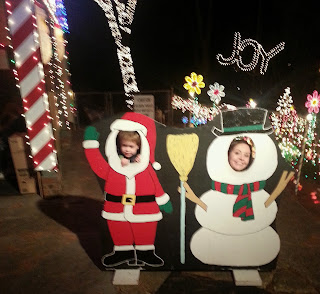 Charlie loved all the decorations but wanted to go touch everything which isn't really allowed.  So, as a 2 year old, that means you just say that you want to do it louder and whinier!  Oh boy! 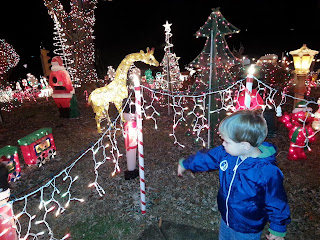 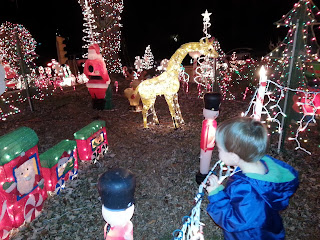 Friday night, we went out to eat with Knee-knee and then went to Lewis Ginter.  I've been once before and loved it that time.  It's a fun activity for all ages.  This time was no exception.  Charlie was very amazed and loved the lights. 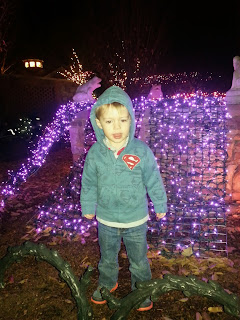 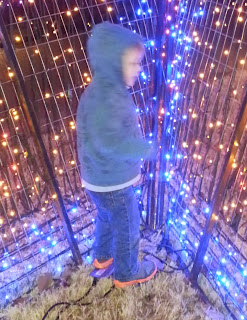 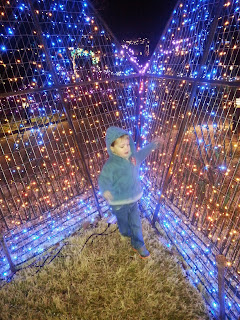 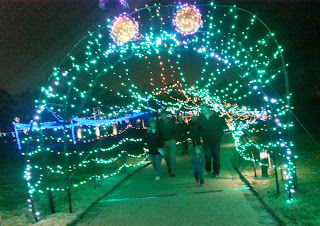 The highlight was definitely the train for Charlie.  He did not want to leave so we stood there long enough for Matt and Aunt Knee-Knees arms to get tired.  (I got out of it as the picture taker!)  :-) 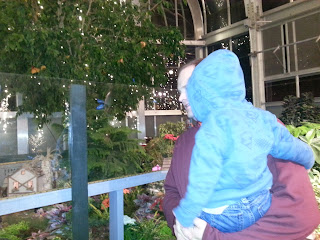 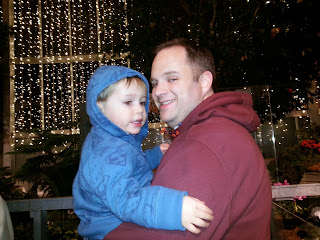 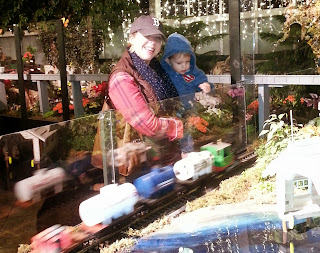 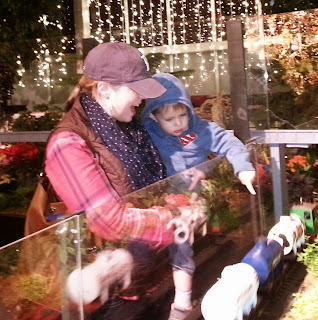 For me, it was the big Christmas tree. 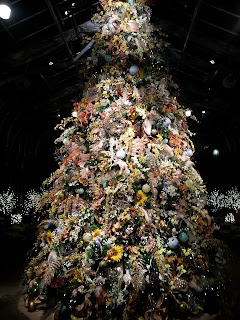 Saturday, Charlie's daycare sponsored Pancakes with Santa.  This is the 2nd year that they've done this and I love it! The daycare is decorated with all these items that the children have done.  It was so cute with reindeer, trees, snowflakes, etc.  I only got this one picture of a tree that they did on one of the walls.

In Charlie's room, they made a tree on the window which was made with each of the kids hands prints.  In the front area, they made elves which had all the teachers faces on them.  So cute!  As far as Santa is concerned, Charlie did GREAT!  He went in and immediately wanted to go to Santa.  He was slightly concerned and annoyed that he had to wait his turn (typical 2 year old).  Luckily, the "line" was only 3-4 children in front of him and went quickly.  Charlie went straight and sat on his lap and asked Santa for a "blue choo choo train".  That's what he's said consistently for the last week.  I didn't take any pictures because I was too busy watching it all.  The director was taking pictures so I'll post them once I get them.  He told them all bye and we headed in for the pancake bar, which had all the toppings.  Charlie enjoyed the whip cream on his pancakes. 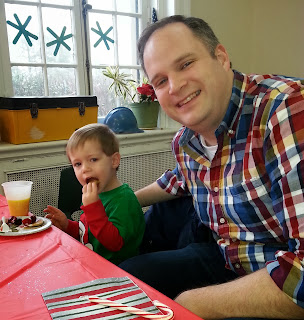 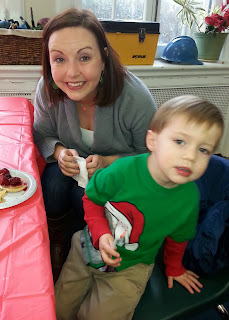 After the pankcakes, I asked him to go back and sit on Santa but, of course, he was too busy to fool with that.  He obliged and sat on Mrs. Claus lap but he was only stopping for a second so I had to snap quick and he wasn't going to smile! 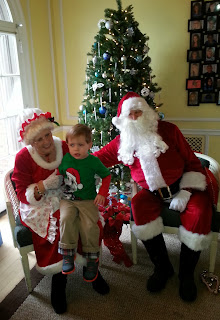 Matt left for a night with his friends so Charlie and I spent the day running errands and staying very busy.  The only time we stopped was for him to nap and I was busy folding laundry, making my grocery list, etc.  Charlie was so well behaved and a great helper while running errands.  We even went into a store that was not child friendly.  I gave him a long pep talk before going in about how I was going to carry him and he had to keep his hands to himself.  At one point, he wanted to touch something and I asked him if he remembered what I told him.  He repeated back to me, "you are going to hold me and I can't touch anything."  I said that's right.  After we left, we walked to the next store which was a toy store and he touched everything!  :-)  He was good at the grocery store, which really is the normal.  He loves the grocery store.  It was a nightmare because we had potential ice/winter weather for today.  We came home after our errands and we were tired.  We ate frozen pizza for dinner and watched Christmas shows on TV!  As I was tucking Charlie in, he said his prayers and he thanked God for "the shopping carts at the grocery store".  It's the little things but I agree that they are very helpful!

After he went to bed, I stayed up half the night and worked on wrapping presents.  Charlie was happy to see presents under the tree.  I'm happy to report that nothing has been unwrapped YET.  He seems most excited about the shape of one of Papa and Grammie's gifts.  It's a small box, which seems contradictory to me because I remember as a kid, I always was obsessed with the bigger presents.  :-)

Today, we have done NOTHING!  (That's not entirely true since we cleaned bathrooms, vacuumed the house, more laundry, and cleaned the kitchen but we did it all in our sweats!)  We woke up this am and spent some time in Mommy's bed.  Charlie had no problem taking over Daddo's spot since he was gone.  :-) 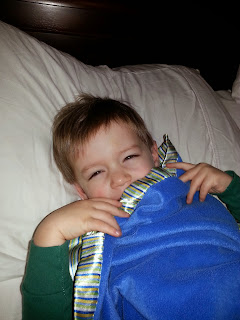 We did have nasty rain, sleet, snow, etc. 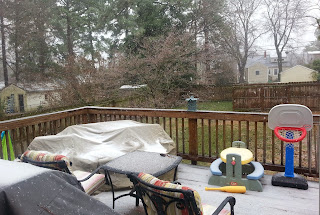 No accumulation but enough to where we just stayed in.  Matt got home safely.  Once he made it home safe and sound, I felt that I could just relax and enjoy this time of being "stuck" inside.  We had something at church this evening but it was postponed!  We are all just in our "comfy clothes".  Charlie's playing with every.toy.he.owns.  Matt is watching football and I'm blogging.

Posted by Stephanie at 5:36 PM