What I wasn't prepared for...

So I don't think I exactly understood how hard daycare could be for a baby and his naive immune system.  Charlie seems to be on the weekly plan of catching the latest greatest awful bug.  This week topped all of the ones prior.  And, as if Charlie catching it is awful enough, he shares.  So, just in case, we don't have to miss work because of him, we get it and then end up missing work because we are sick.

Our weekend started early, I guess you could say.  Thursday night, Charlie was acting fine and then it hit him and us like a ton of bricks.  He started throwing up around 6 and I think it ended sometime early in the morning.  In the middle of the night, I ended up calling our pediatricians night service.  They told me I may need to bring him in the next morning but it definitely sounded like a virus.  Matt and I were up most of the night with him.  He actually handled it pretty well.  He slept a lot, even when he was being sick.  The next morning, Charlie took his first bottle around 5 and it was the first thing that stayed down.  We decided it was still not a good idea to go to daycare so Matt stayed home with him and I went to work.  That day, I called his pediatrician who told me it sounded like a virus and that I should expect diarrhea.  Matt confirmed that was going on at home but otherwise, Charlie was fine.  Friday night, Charlie seemed back to normal.

Around midnight, Matt woke up.  He had the virus and it hit him hard.  He was so sick, every 15 minutes all night long.  I expected him to be fine the next morning since Charlie seemed fine.  Instead, Matt only seemed to get sicker.  He started spiking a fever. (Charlie did not.)  It got up pretty high (104) and I decided that he needed to try to get Tylenol down.  However, he just couldn't keep anything on his stomach.  Finally about 7 pm, he told me he needed some help and agreed with me that he should get checked out.  I called Ali to come over until  Grandpa could get here to take care of Charlie.  By this point, Matt was getting worse so I knew the sooner we could get him checked out, the better.  We showed up to St. Mary's ER and they were wonderful.  Matt got in fast and they got him some fluids and started drawing labs immediately.  His potassium was very low so they gave him some potassium tablets and a couple injections of Zofran.  Finally, around midnight, we ended up back home.  In the meantime, Charlie had a blast with his Grandpa.  THANKS GRANDPA!!!

It's been a little better today but Matt isn't as well as I thought (or hoped) he would be.  He's weak and tired and still having stomach issues.  I have cleaned and washed and cleaned and washed all weekend long.  I have also tried to keep a distance from Matt because I don't want Charlie to get it again and I don't want to get it at all!  I feel like I've ran up and down the steps all weekend,  between my boys.

Matt, Charlie is so sorry he passed this awful virus on to you. 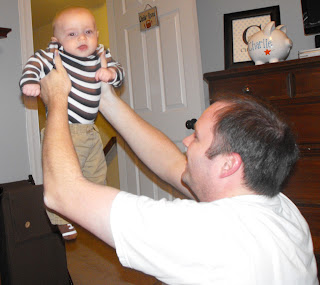 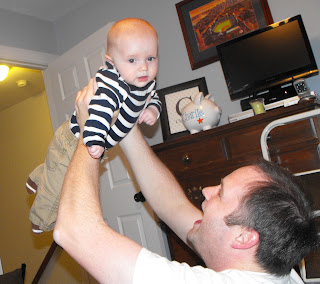 We hope you get to feeling back to yourself soon!!!

As for other items, Charlie and I stayed busy this weekend.  He's been so playful and happy. 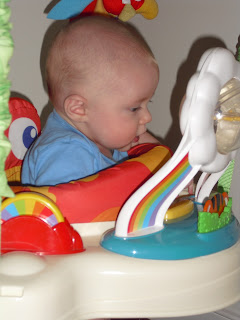 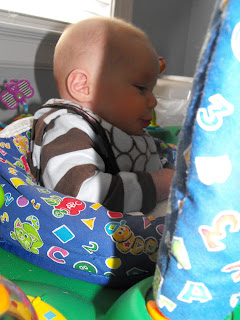 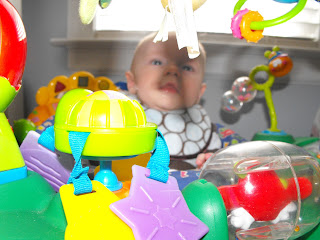 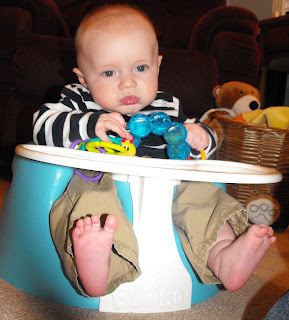 We also tried to go out for a little bit both days to let Matt rest in peace.  Today, we needed diapers so we took a trip to Costco.  Since Charlie takes up the space in the cart, Ali came along with Wyatt.  They needed some items so the kids got one cart and our items were in the other. 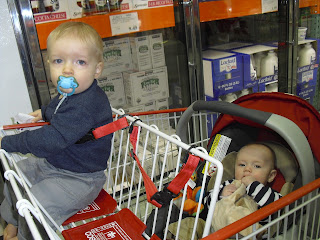 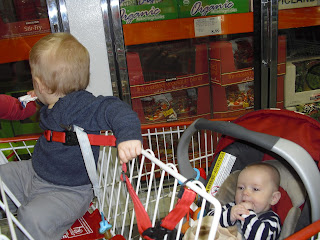 Wyatt waved goodbye to Charlie.  Of course, I didn't get it on camera.  So cute and sweet!! 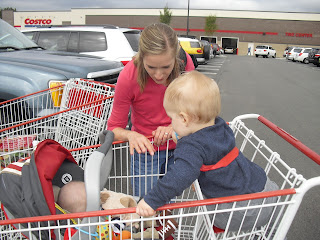 In our free time (ha!), Charlie and I tried to organize his closet a bit.  I decided to get out the highchair.  We may not need it for a month or two.  Charlie thought he should at least sit in it though. 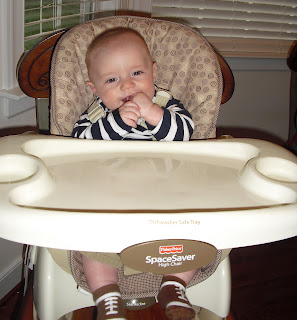 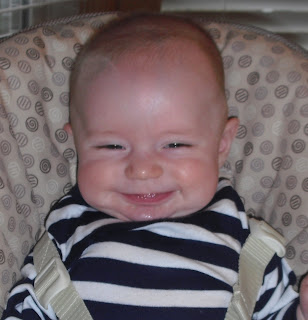 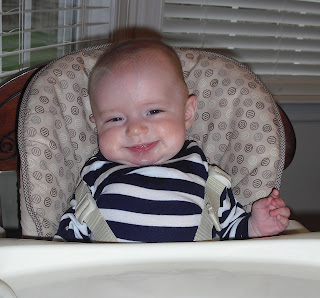 On a separate note, I understand some videos on the 4 month post didn't work.  I think I fixed those in case you want to go back and see my cute boy.
Posted by Stephanie at 9:08 PM